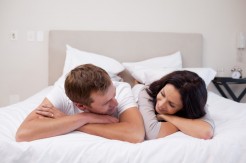 I meet and hear from a lot of wives who don’t like sex.

Not all of them hate it per se, but they really could “take it or leave it,” as the old saying goes.

And most would prefer to “leave it.”

To another day. Another time.  Waaayyyy down the road. Or never.

If given the option between sex and just about anything else, they would lock their eyes squarely on “anything else.”

A bottle of wine with friends?  Yes.

Extra time at the office or the gym? Yes.

No surprise, but this laissez faire approach to sexual intimacy in marriage is not exactly doing wonders for their relationship.  (More on laissez faire later, because ironically I think it is what more marriages need, sexually speaking).

I know right now, some of you are doing mental gymnastics, rationalizing that your husband doesn’t really care about your indifference about sex, because he stopped asking (sulking, complaining, begging) for it so long ago.

The sex issue is a non-issue in your marriage, right?

Righhhttt.  (Let the voice in your head sound all sarcastic when you say right.)

Oh yeah, you not liking sex in your marriage.

(I’m thinking some of you are still hanging in there with me now, still reading, still wanting to get to the part where I tell you 5 ways to start liking sex in your marriage.  Such an optimist I am. But seriously, thank you for sticking around.)

Here are 5 ways to like sex in your marriage.

I suggest you try them all (you know, just to increase the odds that one will be the golden ticket to incredible sexual intimacy in your marriage).

Oh my goodness.  It’s like this is my mantra.  Maybe because I am so baffled how anyone could experience an orgasm and not want to experience it often again.

Orgasm is a learned art, despite what all the romantic comedy movies would have us believe.  So if you have never had one or if you have difficulty having one or if you think it doesn’t matter if you ever have one, then I prayerfully ask you to listen to me.

Your sexual pleasure matters. It does. You’ve downplayed it for too long.  Made it out to be a fringe benefit rather than the real deal, all the while thinking you could check sex off your list as long as he climaxed.

I’ve dedicated an entire page on my site to posts about orgasm. Worth perusing if experiencing orgasm has been a struggle for you.

2. If you are on hormonal birth control, consider using something else.

Not gonna lie. The pill (and most hormonal forms of birth control) potentially has the effect of killing your sex drive.

Yes, I know. Sex drive is a complex thingy that takes its cues from many factors (relationship issues, stress and so forth).  But the reality is that hormonal birth control can have a huge impact as well.

I’m not a doctor, so don’t make decisions based on me.  BUT, I will tell you this.  With hormonal birth control, the natural cycles of heightened desire that God designed are essentially bypassed.  Flattened.  Squashed.  Sabotaged.  Not for all women, but for a lot of women.

How do I know all this?   Well, in my first marriage, I was on the pill and had no idea of its known negative effect on sex drive.  And by “known,” I mean known by doctors, but not always openly talked about with patients.

I’m not bashing the medical profession.  I’m just saying that if you have low sex drive and you are on hormonal birth control, you’d be wise to consider there might be a connection.

Read the fine print. Talk to your doctor.  Talk to your husband.  Maybe a different form of birth control would be better for your marriage.

3. Deal with your past issues.

No big revelation here, but if you don’t like sex because of past experiences you haven’t healed from or dealt with, then it may well be time to get real about getting healthy.

That’s hard. I know. Especially if some of those past issues are sexual abuse or sexual promiscuity or lies told to you by otherwise well-meaning Christians.

At some point you have to start counting the costs of not just what those past experiences did to you then, but also (and maybe more importantly) what they are doing to your marriage now.

4.  Enjoy the sexual power you have over your husband.

Sadly, a lot of women understand sexual power — but in the worst manipulative passive aggressive way.

They use sex as a bargaining chip, reducing profound sexual intimacy to nothing more than leverage for what they want.   Or they tease sexually, but don’t follow through (which husbands will say is a mild form of torture that destroys their sense of manhood).

But sexual power really is a good thing.

You, as a wife, are the one to whom God has granted full sexual access to your husband.  You are the one who gets the privilege in the most private of settings to arouse your husband, to discover what brings him to the edge of ecstasy.

Why would you want to give that power up when you can truly use it to show love to the man you married?

For more reading on this, consider 3 Things Your Husband Wants in Bed, 3 Secrets to Amazing Oral Sex and 5 Ways to Sexually Please Your Husband.

I said I would come back to this phrase laissez faire.  The definition of laissez faire is “an attitude of letting things take their own course, without interfering.”

Couples with the most mutually-satisfying sexual intimacy in their marriage usually have this thread in common:  They nurture sex in such a way that it is intricately woven into the fabric of how they do life.

God wired into marriage this aspect of sexual connection.  And when we stop interfering with that course — when we stop making excuses as to why sex can’t happen — we discover that sexual intimacy impacts everything else.

Do you want to like sex in your marriage? Did any of the above 5 points open your eyes as to why you don’t like it?

26 thoughts on “5 Ways to Like Sex in Your Marriage”