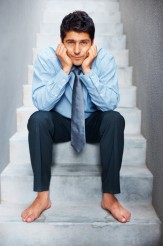 If you are a wife reading this, I want to share with you what I hear from husbands…

…men who email me because they are at their wits end as to how to convey to their wives their disappointment with the lack of sex in their marriages.

A common theme I hear from these husbands?

That it’s not just about the sex.

I imagine that if sex has been a source of contention in your marriage, battle lines have been drawn, right?  Assumptions have taken root.

As a wife, one of your assumptions may be that your husband is just this insensitive guy when it comes to sex… that all it is to him is this physical release… that he is a slave to his sexual urges that have nothing to do with emotion.

Well, that assumption just doesn’t match up to what I hear from many, many husbands.

This is what I think is one of the biggest stumbling blocks when it comes to sex in a marriage.

Deep down I think in many regards, husbands and wives do want the same thing… it’s just they are miles apart in being vulnerable enough to really discover that.

What do guys tell me?  They want a wife who…

Wants to be there sexually.

Truly values sex as an act of deep sacred love.

Is not indifferent or afraid to express that she is attracted to her husband — emotionally and physically.

Doesn’t view sexual connection as an “extra” or “something to check off her to-do list.”

Regards her marriage to him as a high priority.

Touches him outside of the bedroom with genuine affection, sexual and otherwise.

Meant what she said when she gave her whole being to him.

If we really stand back and look at this, the reality is that most wives want the same thing, right?

You want to feel treasured, known and valued.

You want to genuinely believe and trust that your husband still adores you… that he is grateful he married you… that he respects you and desires you, right?

So, it’s not just about the sex.

It’s not just about the physical release.

When he makes love with you, it’s because he wants to know you in the deepest most vulnerable way.  And he wants to be known by you in that way.

Could I be wrong on this?  Well, sure. I know there are some husbands who are selfish insensitive jerks.

Could it be, though, that yours is not?

Could he be a guy who deeply loves his wife… and is in horrendous pain about the way she rejects him sexually?

If I were you, I’d muster up the courage to ask him.

Ask him what sex means to him.

Ask him if he has felt rejected by you sexually.

Ask him if there’s a way the two of you can start to right the ship on what’s happening sexually in your marriage.

You’ll never know unless you ask. Your marriage is worth it.  You are worth it.  And so is he.