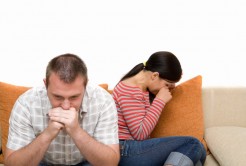 Are we still teetering on the proverbial fiscal cliff?

Depends on who you ask, I suppose.

This fiscal cliff fiasco has been hashed and rehashed in the media, coffee shops, bars and living rooms.

It feels more like a chunky piece of furniture left behind by your irresponsible relative rather than a bureaucratic debate wrought with complex idiosyncrasies.

Yeah, I know. It’s not proverbial.

It’s a real thing with real consequences, many of which are hard to understand in a uniquely personal way.  But in layman’s terms, it is the chunky piece of furniture.  And try as we may to rearrange the room to make it seem less ominous, it’s still there.

“Good Lord, Julie, what does this have to do with sex?  Stop playing with metaphors already or I’m going to want to have some sex on some furniture while Fox News and CNN blare in the background.”

My point (because I always have one, you know) is that all this talk about the fiscal cliff got me thinking about how a lot of marriages are careening toward a sexual cliff.

Is your marriage heading toward a sexual cliff?

Has sex been an unresolved issue in your marriage for quite some time, and it becomes more complicated with each passing day?

Just like with the fiscal cliff, what a sexual cliff truly means varies for each individual couple.

The impact it will have on some marriages may be slow and subtle pain, but on other marriages it could be monumentally disastrous.

What does “slow and subtle pain” look like?  From the emails I get, I gather it looks like…

It’s doubtful any of us can do anything about the fiscal cliff, because we are at the mercy of our… uhh…public servants (what a baffling label that is, but I digress).

BUT, what about a sexual cliff in your marriage?

Who is going to stop you from careening off the sexual cliff in your marriage?

Certainly, some of you reading this want to jump right through the screen and scream at me in exasperation, “But I have tried! I have been trying!  I have brought this matter up over and over, to no avail. I cannot make my spouse change!  They hold keys — keys of solution — that I cannot touch or turn!”

Trust me, my heart is grieved greatly by the audacity of some people to be so careless with sex in their marriage, especially when their spouse has gone to great lengths to infuse the situation with healthy discussion.

And I’m equally grieved by the fact that the spouses who refuse to get real about the sexual struggles are simultaneously robbing themselves of what could be profound connection in the marriage.

In many regards, this post is written to affirm those of you who have longed for things to look better sexually in your marriage.

But even more so, I wrote this post directly to those of you who have minimized your spouse’s pleas for nurtured sexual intimacy.

The sexual cliff is real for many people.  It may indeed be real for your spouse.

It is the chunky piece of furniture that is always noticeable, even if it is rarely or ever mentioned.

If you have been reading this post and it has grappled hard with your heart… if it has indeed sunk its talons into your conscience and compelled you to look closely at what is (or isn’t) happening sexually in your marriage, then consider it your wake-up call.

Retreat not in shame or embarrassment or grief about what you have left undone.  Instead, ease up on the gas and start pressing on the brakes and do what you can to keep your marriage from going over the sexual cliff.

Stop pretending like sex is no big deal and start pressing into God’s heart on this. He is indeed the bestselling author of sex.

And He doesn’t want you going over any cliff, especially one that could damage something as precious as your marriage.

Time for the chunky piece of furniture to go. Start by humbly acknowledging it’s even there.

13 thoughts on “Are You Careening Off a Sexual Cliff?”