Are you sexually refusing your spouse?

I’m not talking about situations where the sexual disrepair is shackled to deep and sometimes painful roadblocks (Lack of repentance about infidelity and pornography use.  Medical diagnoses or injuries that make sex difficult or impossible. Or a handful of other situations).

And I’m not talking about occasional dry spells or slight miscommunications about sexual frequency. 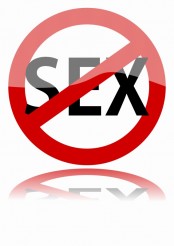 No, I’m talking about sexual refusal — blatant and ongoing — for no other reason beyond that you don’t like sex or simply don’t think it’s vital to the relationship.

Honestly, you may not consider yourself a “sexual refuser,” but I’m guessing at the minimum you would admit you are “sexually uninterested.”

And that sits fine with you.

But not with your spouse.

Yet, you still do life together (well, sort of together. At least together enough that you doubt the absence of sex is going to cause any real problems).

You navigate the mirage of carpools, kid activities, bedtime routines, trips to the grocery store, family functions, the ever-rising cell bill, that volunteer commitment at church, the “I need 3 dozen cupcakes for school tomorrow,” the overbearing bosses and work demands, sticky kitchen floors, empty milk jugs, piles of laundry, errands to pick up poster board, the obnoxious “low gas” indicator, and the ever present, but never quite complete, to-do list.

“Sex? Who has time or energy or longing for sex amidst all that?!”

And you ease your conscience with an occasional reminder that “this is just what happens in a marriage.”  Sex fades. It’s a non-issue.  (to you, at least).

I get that you likely don’t want to hear me say that there may be some costs to your sexual refusal.

But these costs will blindside you when you least expect it, and I’m trying to spare you that kind of wake-up call.

1. Your spouse may be present physically, but check out emotionally.

This is a tough one.

And this may be the one that blindsides you the most.  You may think your spouse is “just fine” with the lack of sex because they still have skin in the game, so to speak.

They still participate in paying the bills, carting the kids around, mowing the yard and going to your mom’s for Sunday dinner.

You feel confident they would never bail on the marriage (they are a Christian, after all).  And you may be right.  They may not bail physically, but I know plenty of people who have bailed emotionally.

The pain of sexual refusal is just too much. And instead of having a “come to Jesus” moment with you to address that pain, they instead start closing doors in their heart.

2. You won’t know your spouse someday.

Well, ongoing sexual refusal is going to widen that chasm.  I guarantee it.

3. You’ll set a sad and unbiblical example for your kids about sex and marriage.

You think those young people in your house don’t know anything about the sexual relationship you have — or don’t have — with your spouse.  You think they are too little or too naive or too unobservant or too indifferent or too grossed out about sex.

But here’s the deal.

Those little tykes you created are going to grow up (quicker than you realize), and word to the wise on this one — they are likely going to get married. And have sex.

They are already getting a horribly skewed message about sex from society.

And the church isn’t fairing much better with its overgeneralized messages that never venture beyond “DON’T DO IT!  FOR CHRIST’S SAKE, STAY PURE!”

Your home should be the first and most significant place where your kids get the message that God designed sex in marriage to be amazing, passionate, soul-binding, extraordinary and pleasurable.

They are learning about marriage from you.  What are you teaching them?

4. You’ll have regrets about things you can’t undo.

I’m not saying young married couples have the corner on great sex, because there is a lot of passionate sex to be had by married folk well into their 40s, 50s, 60s and beyond.

But.  Some effects of time and age simply are unavoidable, at least for many people.  Some conditions become more prevalent as we age, not to mention increased challenges with hormones.

So by the time you wake up to what nurtured sexual intimacy could have been to your marriage, it might be too late to really undo the damage.  You may have already paid a heavy price, without even knowing it.

5. You’ll be hurting the person you claim to love.

Here is the crux of it all.   Do you love this person you married?  (Some of you will answer “no” to that, so suffice to say, I’m speaking to those of you who would answer “yes”).

Do you love this person? This person you chose to become one with — figuratively, literally, spiritually, practically.

Love in marriage is expressed many ways, and God calls us to pay attention to all of those ways, including sex.  He doesn’t offer up “ways to love” as a smorgasbord from which you can choose at your whim, disregarding what doesn’t suit you.

Sex is part of marriage in such an intricate way that when one person arbitrarily removes it, rare is the relationship that can survive such void (at least survive well, which I am guessing you want, right?  A strong marriage. Not just one that exists).

What costs are you willing to pay by sexually refusing your spouse?  Best decide now.  The price only will go up.

44 thoughts on “5 Costs of Sexually Refusing Your Spouse”