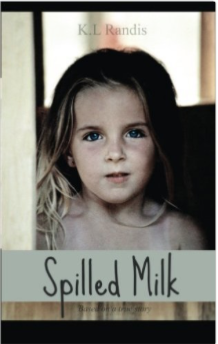 I read a lot, so my ears perk up when a friend recommends a book.

A good friend of mine recently recommended the book Spilled Milk by K.L. Randis.

I’m sharing about it here for a couple of reasons.

First, It is an incredible personal story of childhood sexual abuse and what it took for one person to not let that abuse define her life. Though the author writes it as a novel, the book is based on her own story.

It is the account of a girl named Brooke, who endures horrendous sexual abuse at the hands of her father in a family wrought with dysfunction.

Not only does she eventually realize that the abuse she has suffered since she was a small child is not normal behavior for a family, she also courageously faces her abuser to see he is brought to justice.

And she fights her way to a healthier life.

Second — and possibly more importantly — I’m sharing the book because it has a message worth acknowledging — not all cases of sexual abuse carry with them what we often consider “classic” warning signs. Brooke never was a “troubled” child or teen who “acted out” rebelliously.

In Brooke’s case, though her family was extremely messed up behind closed doors, the outside world would have had a hard time detecting the horrific physical and sexual abuse. Brooke was a model honor student who excelled in school. She had friends. She was a cheerleader. She was incredibly responsible at her job.

It isn’t until she starts to spend time with a her boyfriend’s healthy family that she starts to realize the pain and abuse and fear she and her siblings experience at home is not normal and should not be tolerated.

The title Spilled Milk hails from her eye-opening moment when her boyfriend’s little brother spills milk at the dinner table one evening, and Brooke is amazed the child’s father doesn’t beat him for it.

This a novel about courage — Brooke’s courage, of course, but also the courage of adults who rallied around her to support her.

That should be a reminder to us as well, that it is not only people in “official” positions who play a part in justice, but also people who simply were in the right place at the right time to courageously get involved in one person’s path toward healing.

This was not an easy book to read, and I say that as someone who has never been sexually abused. I can only imagine how hard it would be to read for someone who has been abused. I can see, though, where Spilled Milk could help countless people feel less alone in what they endured as children at the hands of people who are supposed to love them.

This is an important book, if for no other reason than to shine light on conversations that are vital if we want to protect some of society’s most innocent members — its children.

Thank you, K.L. Kandis, for your courage. Your heart. Your story.  This book shows your exemplary bravery in the face of excruciating life circumstances.

You can find out more about Spilled Milk at this link.

As someone who writes about intimacy in marriage, I know that many marriages struggle because of the abuse one or both spouses experienced when they were young.  It is for this reason I am forever grateful for authors like K.L. Randis who are willing to speak up.  Her courage not only helps individuals, but also couples who are suffering because of the effects of past abuse.

If you were sexually abused, please do not give up hope in finding healing. May K.L. Randis’ story and others you may know of inspire you to seek out resources that will help you on a path where the effects of your abuse no longer have such devastating impact on your life.

One thought on “Childhood Sexual Abuse and the Book “Spilled Milk””