It is no wonder that skewed beliefs about sex begin to take a huge toll on sexual intimacy in marriage. Sadly, some people are numb to all these skewed beliefs. 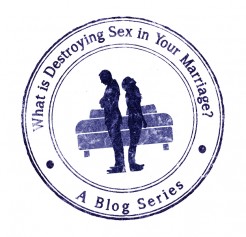 Paul Byerly of The Generous Husband sheds light today on the reasons we need to hold up any of our beliefs about sex against what the Bible really says.

Too often, what we believe about sex doesn’t even come close to God’s vision for our marriage. Paul’s post is part of my ongoing guest blog series on things that destroy sex in marriage. I so appreciate Paul and his wife Lori, who have been champions of authentic intimacy for years.

Google defines skew as “make biased or distorted in a way that is regarded as inaccurate, unfair, or misleading.”

We get sexual messages from TV, our friends, church, and our culture in general.

So many sexual messages, and virtually all of them are inaccurate, unfair or misleading.

As a part of our modern culture, you’ve had a number of skewed sexual beliefs piled on you. Even worse, it started long before you were interested in sex.

Are those skewed beliefs destroying sex in your marriage? They certainly are not making sex great!

Unable to do what they saw, they blamed each other. At best this led to frustration and anger; at worst, it led to divorce. Skewed sexual beliefs destroyed not only their sex lives, but also sometimes ended their marriages!

Some of the most dangerous skewed sexual beliefs are the negative things we get from our family of origin and the church.

These range from subtle hints that sex is overrated to blatant proclamations sex is just for men. Mothers “warn” their daughters to protect themselves from their husbands, rather than encouraging them to enjoy sex with abandon. They pass their disappointment and frustration on to the next generation, setting up another marriage for sexual problems.

He says both men and women should greatly want and wildly enjoy sex.

In the Song of Songs and elsewhere in the Bible, several passages talk about sexual abandon using words normally applied to being intoxicated with alcohol.

Any beliefs at odds with what God says are skewed beliefs. If you want a better sex life, root out skewed beliefs and reject them the way you would reject any other kind of posion!

Paul has been blogging about marriage since dinosaurs roamed the Internet. He blogs to men on The Generous Husband, to women on The XY Code, and writes about all things sexual with his wife Lori on The Marriage Bed. He and Lori recently set out on an adventure to become full-time RVers.

2 thoughts on “Are Skewed Beliefs Destroying Sex in Your Marriage?”