I think most people head into marriage with this overwhelming assumption about sex:

That it will be easy.  That everything will happen naturally. That there won’t be any significant sexual struggles. 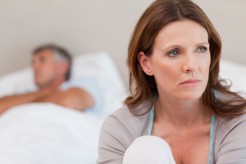 But you get the idea, right?

Maybe you can even relate, because you packed those assumptions into your marital suitcase and called it good.

And then you were married for awhile, forced to look closely at everything you had put in that suitcase.

Or, if you are like many people, you did the opposite — you shoved that suitcase under the bed. You chose to ignore the ways your assumptions where going head-to-head with your realities.

Your realities were winning the battle and your sexual intimacy sucked.

And you proceeded to tell yourself these lies about sex:

Oh my, did I tell myself this lie big time in my first marriage.  We had sexual struggles, and I knew it.

But rather than call those struggles out, get transparent and try to have an honest conversation about those struggles, I banked on the elusive “someday” instead. “Someday” never arrives on its own.  You have to walk in the direction of health if you want healthy improvements in your sexual struggles.

And that’s hard, sometimes incredibly painful and filled with anxious moments. But living in the status quo of sexual mediocrity isn’t exactly a cake walk either. It is better — and wiser —  to get courageous and look at what is suffering in your lack of intimacy.

I think you will discover that your marriage is suffering, your spouse is suffering and truth be told, you are suffering.

LIE #2:  “I don’t deserve good sex in my marriage because I was promiscuous in my past.”

No news flash here — many people, including many Christians, come into marriage having already had sex — maybe even having had wild drunken “can’t remember his name” sex.

And here you are, a Christian wife, trying to figure out how to have passionate sex in its right context of marriage.  When sexual roadblocks come, you feel completely derailed.

And you start saying things to yourself like, “Well, maybe I already screwed all this up.  I was so careless with sex in the past.  God can’t possibly forgive me.  Bad sex (or no sex) in my marriage is my punishment.”

Best to combat that lie with the truth. Otherwise Jesus’ blood means nothing. The truth is that if we repent of our sins, including our sexual sins, and ask for forgiveness, we are indeed forgiven.

You can build amazing sexual intimacy in your marriage on a clean slate — but you have to accept the clean slate.

LIE #3:  “Enjoying sexual pleasure is sinful, even in my marriage.”

If this false tape is rolling around in your head, my guess is it was originally recorded at the hands of well-meaning, yet slightly delusional, Christian adults who never told you that sex in marriage is good.

Instead, all you heard was an over-generalized message of “sex is bad” or “sex is wrong” or “sex is gross” or some other version of that lie.

Well, time to toss that mix tape and replace it with an updated truthful playlist.

(If you are too young to know what a mix tape is, that’s adorable.  I’m guessing, though, that you completely know what a playlist is, regardless of your age).

As a married woman, your playlist needs to include hits like “Sex is Good!” and “Sex is from God!” and “Orgasm is One of the Best Things Ever!”

The Lord, Master Creator that He is, designed sex.  Orgasm was His idea — part of the Master plan; not an “extra” tossed in at the last moment.

I’ve heard people say, “Well, God had to put orgasm in or otherwise people would never have sex and procreate.”

Uh, last time I checked, we don’t serve a Lord who is hip on trickery.  That’s not His gig, and my guess is, deep down, you know it.

He is a generous Lord.

The vast majority of sexual intimacy in marriage is not for making babies.  It is for bonding and pleasure and covenant and remembrance of the oneness you share with your spouse.

To call something sin that is indeed NOT sin, in my opinion, makes this the worst of the 3 lies.

If you’ve believed the above lies about sex in your marriage, what will it take for you to shed light into those caverns of darkness?

There is great sadness that such lies even exist.  But the real devastation happens when we cling to them and protect them — as if they are our identity.

Maybe give truth a shot instead.