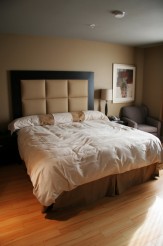 I received a comment the other day from a husband sharing about the lack of sexual intimacy in his marriage.

He made an observation that I think prevails in many marriages regarding sex:

“Many husbands want to have fun, but many wives want it to be over.”

Does that sound familiar? Reflective of  your own marriage?

Possibly you wish it were different.

That sex was just for procreation and nothing more. Or that it was listed in the Bible as optional for married couples, a “take-it-or-leave it” proposition.  A mere suggestion.

If you feel that way, then likely when you and your husband have sex, you simply want it to be over, right?

And the quicker it’s over, the better.

Meanwhile, the man you married had visions of something else in the marriage.

And his resentment is growing as well, because the one person with whom he is allowed to have sex seems to consistently be the person least interested in sex.

It’s a vicious cycle, this spiral of him wanting sex.  And you wanting it to be over.

And after awhile, that kind of bitterness and tension and division seeps all over the marriage, showing up in unexpected ways and in hidden corners that look like contempt.

Rather than safe haven.

What is ironic is that in many of those marriages, what each spouse truly is hungering for is authentic intimacy.

Contrary to what many wives believe, there are countless husbands out there who readily say that sex is never just about sex.  It’s about being deeply vulnerable and emotionally naked with the woman he married.

The degree to which his wife enjoys sex, seeks it with him, looks forward to it and yes, even has fun with it, speaks to him greatly about the depth of her love for him.

And I have talked to countless wives who say they want a husband who is more emotionally available — someone who wants her for more than her body.

She hungers for a man who is as interested in the inner workings of her heart and soul as he is in the feel of her breast in his hand or her body against his.

But don’t you see — doesn’t it start to make sense — that emotional desire and physical desire in a marriage are intricately connected?

It is difficult — almost impossible — to authentically experience one without the other.

This weave of physical and emotional intimacy is one of the ways God made marriage unique from any other human relationship.

And don’t even get me started on the spiritual intimacy a couple is missing out on when sex is reduced to nothing more than a bargaining chip.

If your husband wants sex to be fun and you just want it to be over, neither of you will likely ever have your thirst for emotional intimacy or physical intimacy quenched.

If the normal in your marriage is that sex is a battleground rather than a playground, then it is time for a new normal.

Yes, it’s either you both move toward a healthier new normal in your sexual intimacy or you continue on a path of the status quo of disconnect and discord.

When you look at it that way, does it simply grieve your heart?

Or does it actually inspire you to make a change?