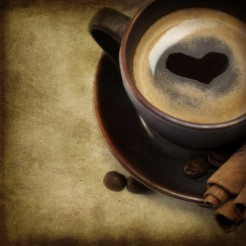 Before age 34, I was never a coffee drinker.

The first time I had a latte, I was about 6 months pregnant with our youngest son.

In my naivety, I failed to order decaf, so you can imagine what the caffeine did to my heart and kid.  Poor little guy.

He probably felt like I jabbed a syringe full of adrenaline straight into his thigh.

Anyway, that was 9 years ago.

Despite the experience, I still don’t order decaf (only now I’m purposely not ordering decaf).

In fact, more often than not, I’m asking the hip young barista to throw in an extra shot of espresso. I glance at him with that “you-have-no-idea-what-I-have-to-get-done-today” sort of look.

He glances back un-fazed, because he has seen that look a thousand times before — from other 40-somethings who keep hoping someone will come up with an app that can drive the kids to school and keep the fridge stocked and do the laundry.

Not surprisingly, the caffeine doesn’t seem to jolt me like it used to.

Sure, I feel its effects some, but for the most part, my body has built a tolerance for that kind of rush.  I’m certainly more numb to it now than I was when I sat at that coffee shop 9 years ago, introducing my kiddo to his first encounter with a caffeine-fueled mama.

It’s interesting what we can tolerate if we subject ourselves to it long enough.

Caffeine is probably the least of our worries in this regard (although some doctors would beg to differ with me. I know. I’ve feigned concern when my doc tells me to not drink more than two caffeinated drinks a day and certainly not after noon. Uhh. Okay. Whatever.)

Caffeine warnings aside, are there other times when we have built a tolerance for something much more damaging?

In marriage, sometimes tolerance morphs into an icky acceptance of patterns that just aren’t good for us.

Or no sex at all.

My email inbox is strewn with strangers’ emails.  Their hearts and words spill like emotional wreckage across my computer screen, accounting often in great detail the devastation of having tolerated a marriage void of authentic sexual intimacy.

Usually, one person is tolerating the lack of intimacy — and the other person is completely indifferent or unaware of it.

Lately, I have received a few emails where people have shared this sentiment: “My spouse has said they would be fine with never having sex again.”

If you have become numb to your sexless marriage, I humbly encourage you to ask yourself if that numbness — that tolerance, so to speak — is bringing you closer to your spouse or causing a widening divide.

I can’t answer that for you.

All I know from my casual sideline view and from having a heart sensitive to this aspect of marriage is that I never hear stories where little or no sex in a marriage is doing any good.

The marriages where little or no sex is happening (and there’s no reasonable reason as to why) are ones that tend to lack the deep endearment that people envision they will have when they marry.

At best they are characterized by two people who are going through the motions of a life that looks strikingly similar to two roommates. We share bills. We share a washer and dryer. We share a bathroom.

There is discord and disconnect, but not enough safety and trust to truly address those issues mutually and selflessly.

At worst, they are characterized by two people who cannot stand being in each other’s presence and are internally processing how they can survive the marriage — or get the heck out of it.

So, if you stand back and realize that little or no sex has become your norm, have you also counted the costs?

If we could sit and talk over a cup of coffee — and I knew your marriage was lacking authentic sexual intimacy — I would courageously ask you that exact question.

What would your answer be?

56 thoughts on “Are You Numb to Your Sexless Marriage?”