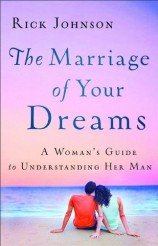 If we look, we will find nuggets of wisdom that will help us strengthen our marriages.

I read every book through that lens, trying to mine relevant information that is applicable to my marriage.

Such is the way I read Rick Johnson’s book “The Marriage of Your Dreams: A Woman’s Guide to Understanding Her Man.”

For the most part, I liked this book and I did find nuggets of wisdom that either enlightened me about my husband or further confirmed what I already knew to be true.

More importantly, I like that Johnson is clearly a man devoted to helping men be better men in whatever role they walk — as dads, husbands, mentors, Christian leaders and workers.

He also strives to speak into women’s lives, mostly to help them understand their men.

“The Marriage of Your Dreams” is aimed specifically at wives to give them a clearer perspective on what they may find particularly baffling or frustrating about their husbands.  It’s like peeling back the cover on a man’s inner thoughts and attitudes, laid transparently for us gals to learn from.

Even though the book’s primary audience is women, I think couples could greatly benefit from reading this book together.  Seriously.  I think it would be a great book for a couple to go through chapter-by-chapter, discussing afterward what struck each as true in their own marriage.  Great opportunities for conversation starters, that’s for sure.

The book is definitely in-depth, as Johnson offers insights on everything from a husband’s relationship with his mother to his emotions to his struggles with temptation to what he needs in a wife.

And the book clearly drives the point home that men and women are indeed different.  Even though there has been much commentary on this fact from marriage writers over the past several years, I believe that much frustration still happens in marriages because we as married folk don’t really get this.  We still under our breath in frustration say to ourselves, “Why can’t my spouse be more like me?!!”

Johnson goes to great length to show you why your husband is different than you — yet equally capable of bringing value and strength to the relationship.

The only qualm I think some people may have with the book is that it does seem to be framed around what many would say are “stereotypical” masculine roles, perspectives and attitudes.  Some may even say he makes sweeping generalizations at times.

This is where you have to have a mature heart and eye to not be too quick to get defensive about some of the things Johnson writes.  If you want to find the nuggets of wisdom, you have to be willing to take a deep breath when you come across something with which you disagree or is completely not relevant to your situation.

Honestly, I think sometimes people get defensive not because they genuinely believe the author is wrong, but because the author has revealed a truth that they find overwhelmingly painful on a personal level.  You may see reflections of yourself or your life in some of Johnson’s passages, I have no doubt.

As for what I like about the book, I like that Johnson is spot on in many of the things he shares.  He does a great job of showing why the sanctity of marriage and healthy relationships have taken such a toll from the carelessness with which we as a society have treated sex, parenting, manhood, womanhood, etc.

In this regard of the deterioration of sexual integrity among singles, I found this excerpt thought-provoking about how easily many single women give sex…

“…our culture now teaches girls and young women to be the aggressors in relationships. One of the fallacies that the sexual revolution propagated was that women should be the same (not just equal) as men in all ways, especially sexually.

Thus women were pushed to act just like men and be sexually aggressive, whether it was healthy for them or not. This has been detrimental to females in several ways, one of which is that it causes males to be lazy, passive, and take women for granted in their relationships.

Men get what they want (sex) without having to sacrifice anything in return. Males typically do not appreciate or value things they do not have to work for. So if sex comes too easy, they do not value the vessel.”

Another passage that I think is accurate…

“Many women complain to me about the lack of leadership their husbands display in the home. Many of these men are powerful decision makers in the business world, so it’s not like they don’t have the skills or competence to lead their families as well. So why do they shy away from leading in the home?

Why make a decision or take leadership role if you are just going to be criticized and judged for the choices you make? Many men find it easier to let their wives make the decisions rather than deal with the frustration of being condemned.

Of course, this frustrates women, but you need to recognize that you cannot have it both ways. Either he leads and you respect that, or you lead and quit complaining about it.  Certainly, there is room in a marriage for leadership from both spouses, but oftentimes a wife’s unrealistic (in a man’s eyes) expectations in this area are daunting to her husband.”

See what I mean?  Some people would find that passage offensive, but I think the scenario he describes plays itself out in countless marriages where a husband and wife are trying to find their footing in respecting each other’s roles.

Some women may find it surprising to discover that most men really do need companionship with their wife, as well as encouragement, compassion, forgiveness and a safe place to be vulnerable.

As far as what Johnson writes about sexual intimacy (you knew I would be drawn to that!), much of what he shares is what I think women have often heard (although, not always heeded).  Most husbands are visually driven, struggle with sexual temptation, and greatly crave for their wives to see the importance of sexual intimacy.

I liked this excerpt…

“Tell your husband what you like or don’t like in bed. Teach him where to place his hands or lips. Show him what feels good to you. Not only will you benefit but your husband will be much more fulfilled as a man.”

The fact that most men deeply desire sex on a consistent basis with their wives is an attribute to the relationship, and sadly too many wives see it nothing more than an inconvenient detriment.

All in all, I think any married couple could glean from this book.  At the end of each chapter, Johnson even provides “Real Questions from Real Women,” where he answers some common questions women have about men.

If you as women are looking for a book for your women’s Bible study or a book for you and your husband to read together, I think “The Marriage of Your Dreams” could offer some valuable insights to you.

For more on Rick Johnson, go to www.Better Dads.net.  Johnson is the author of several other books and is a sought-after speaker in the United States and Canada.

5 thoughts on “The Marriage of Your Dreams”