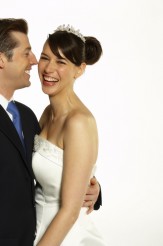 This statement — or closely-echoed sentiments — is a foundational premise in marriage.

Have a conversation with any bride or groom moments before they stand in front of a pastor, priest or judge, and ask them if they want to be desired by the person they are about to marry.

Yeah, tell me everyone’s hands aren’t shooting up on that one.

Sift away the people whose nuptials are a mere facade, and you are left with the vast majority of us — people who stand at the altar in love with the person they are about to marry and who look forward to being desired by that person.

I would even go so far to say that we consider it such a given at the beginning of marriage — so woven into the fabric of what we envision marriage to be — that if you were indeed to ask brides and grooms the question, they would think you are ludicrous for even having to ask.

“Isn’t the answer obvious?” they would respond, possibly with a look of shock on their face.

We probably could argue that even in the arranged marriages prevalent in some cultures, a bride and groom still have a sense of wanting to be desired by the person to whom they are about to make a lifelong commitment.

Whether the words are ever spoken out loud, the essence of that statement hangs in the air at the start of every genuine marriage.

But as we all know, the road of good intentions eventually is cluttered with more than its fair share of detours and roadblocks.

The stuff of life begins to suck the life right out of the intensity of wanting.

One or both of the people who radiated with joy at the altar begin to haphazardly forget or blatantly disregard what it means to want and to be wanted.

And of course this whole aspect of wanting happens in the realm of companionship with our spouse, but this is a blog about sex, so for purposes here, I’m talking about wanting to be sexually desired by the person we married.

Is it no wonder that when we come face-to-face with how genuinely difficult marriage is, sex becomes ironically fertile ground for the thoughts and actions we couldn’t fathom would ever have footing in our marriage — disdain, annoyance, contempt, pain, discouragement, manipulation.

Or, in some cases, neither spouse is bitter about the arrangement. They’ve simply agreed that sex is not essential, an “extra” of marriage they could both do without.

Regardless of the emotional framework underlying a marriage void of sex, when both spouses become indifferent, the marriage is reduced to mere roommate status. Two people “do” life in each other’s presence, but the sense of deep oneness that is possible in marriage is absent. They are missing out on the unique enrichment that sexual intimacy affords.

A more common scenario we marriage bloggers hear about is when one spouse wants to be wanted and the other spouse doesn’t have a similar desire and/or doesn’t value it in their spouse.

The marriage is characterized by resentment, anger, pain and isolation. The issue of sex — and the lack of being on the same page about it — begins to permeate the rest of the marriage.  As in the first scenario, we have two spouses who are missing out on the unique enrichment that happens through sexual intimacy.

I find it fascinating that it is not uncommon to hear some wives say “I just wish he wanted me for me” and some husbands say “I wish she wouldn’t just go through the motions during sex.” (Granted, sometimes the roles in this scenario are flipped and the wives want more sex, as my blog and others have pointed out lately).

Regardless of the specific circumstances within each marriage, we still can trace back to a wedding day where “I want you to want me” was considered a non-negotiable.

It is a truth about marriage we cannot escape.

Try as we may to deny it or say it doesn’t matter or allow it to become relegated to virtual non-existence, the truth still remains.  And in our actions and inactions — and in our thoughts and our words — as married couples we must choose if we will do the mature and loving thing and see that wanting to be desired sexually has genuine merit.

I’m talking about genuine physical desire for each other.  It is a desire that cannot be quenched by anyone else other than our spouse, at least not if we take our marriage vows seriously.

Personally, I think the anticipation that goes hand-in-hand with expressed desire — verbally and non-verbally — is some of the best foreplay around.  At least that seems to be the case in my house.

I love to be wanted by my husband. (From my very un-scientific and unorthodox polling methods, I’m fairly certain my husband likes to be wanted as well).

Look at that closely.

Wrestle with it if you must.

Do what you can to understand what it means within your marriage bed.

Mutually-valued physical desire has amazing potential, if you embrace it rather than relentlessly try to escape it.

Truth be told, it is a truth you can’t escape.  You stood at the altar wanting to be wanted.

Do you still want to be wanted?  Does your spouse?

22 thoughts on “One Truth About Marriage You Can’t Escape”