I am diverging a bit here from my regular hot topic of sexual intimacy in marriage, to chime in on what is becoming an increasingly volatile topic.

Christians and non-believers are weighing in mightily, and I want to throw my opinion on the table. 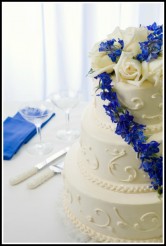 The debate is about whether businesses should be able to refuse service to homosexuals, on the grounds that the homosexual lifestyle is contrary to the business owner’s religious beliefs.

The businesses garnering the most media attention on this are those involved the wedding industry.

Bakers, florists, caterers and photographers, in particular, are caught in the crosshairs of the dialogue, as increasingly more states are recognizing same-sex unions.

Those people OPPOSED to forcing businesses to offer services to homosexuals say that the businesses should have the religious freedom to refuse, because if they were to agree to provide service in these situations, they (the business owners) would be condoning something they believe is sin.

Those IN FAVOR of forcing businesses to offer services to homosexuals say that the businesses are discriminating against people based on their sexual orientation and such discrimination is wrong and should not be tolerated.

I know Christians in both camps, and I’m not overly interested in moving someone from one camp to the other.  I’m also not naive enough to think I could even do that anyway.

What if there is a better response to this?

What if love and conviction can co-exist?

For lack of a better cliche, I just don’t think that cake baking would have been a mountain Jesus would have died on the side of.

And yet people in both camps of this debate are clamoring to die on the side of the cake baking mountain.  Good Lord, there has got to be a better response.

What if love and conviction can co-exist?

To see this play out, we need to look no further than Jesus’ response regarding the adulterous woman (Read John 8:1-11).

The Pharisees think they have found the perfect opportunity to leverage Jesus’ message against Him.

Standing before Him is a known adulterous woman, and how does He respond?  With kindness. That is where He started. (The Pharisees’ plan backfires on them).

Jesus engaged her in conversation. Treated her with respect. Did not condemn her. Love was His foundation.

But where does their conversation eventually arrive?

It arrives with Jesus saying leave your life of sin. Her adulterous lifestyle did not honor God, so He told her to stop doing it.

Yet His tone of respect and love never wavered.

Some would argue it was the most loving thing He could do — to receive her with respect AND simultaneously tell her to go and sin no more.

And honestly, we don’t know if that is indeed what she did, do we?

We don’t know if she stopped her adulterous activities. It has never been God’s responsibility that someone stop sinning. Never.

If Jesus is our model, then neither should it be our responsibility that someone stop sinning.

It is our responsibility to give an answer for the hope we profess.

“Who is going to harm you if you are eager to do good? But even if you should suffer for what is right, you are blessed. Do not fear what they fear; do not be frightened. But in your hearts set apart Christ as Lord. Always be prepared to give an answer to everyone who asks you to give the reason for the hope that you have. But do this with gentleness and respect, keeping a clear conscience, so that those who speak maliciously against your good behavior in Christ may be ashamed of their slander.” — 1 Peter 3:13-15

If I owned a bakery and a gay couple wanted me to bake a cake for them, I would start with love. I would bake the cake.  But then I would say, “I don’t think this lifestyle you are living is God’s best for you.  I believe God has something better for you.”

All in a tone of love.

Whether they would agree with me that their lifestyle is sinful is not my responsibility.

(If we wanted to dig into this further, we could look closely at John 4:1-26, where we see Jesus encountering another adulterous woman, only this time He does not command her to leave her life of sin but rather simply proclaims who He is and let’s her ponder the significance on her own).

The reality is that just as Jesus did, we encounter sinners all the time.

Let’s say you own a coffee shop and a customer walks in who you know is cheating on his wife or disrespecting his parents.

Or let’s say you own a gas station and you see a customer pull up to the pump who you know is spreading gossip about her neighbors or operating her business unethically.

All are sins, correct?

In those situations, are you going to refuse to sell the man a cup of coffee or refuse to let the woman fill her gas tank?  And if you do allow them to do business with you, have you endorsed their sin?

It’s kind of crazy when we look at it that way, right?

Someone fills their gas tank at your gas station and that one act — you selling them gas — means you think there’s nothing wrong with them spreading lies about their neighbor?  That is a ridiculous correlation, if you ask me.

If we want to be really literal, everyone we encounter, whether in a business situation or not, whether we are a customer or a provider, is a sinner.  (As is the case when people encounter us, but we tend to be much slower to acknowledge our own sin).

I can already hear many of you saying that my examples of the coffee shop and the gas station are not an apples-to-apples comparison to those businesses directly involved in the wedding industry.

Some would argue that the cake bakers, wedding photographers, florists and caterers are in a uniquely challenging situation, because their services usually require more “participation” in the event.

But why are we so quick to make the leap that the photographer, caterer and florist in such business transactions have condoned something?

We need a foundation of love intricately entwined with our own conviction.

Personally, I’m not a fan of gay marriage or gay romantic relationships, primarily because I don’t see them represented in the Bible.  I think God could have set up marriage however He wanted, but what I see through His Word is that He chose to establish the covenant of marriage as being only between a man and a woman.

BUT my faith conviction — my interpretation of scripture — does not wipe out my ability to treat with kindness someone who holds a different conviction.  Love and conviction can co-exist.  They are not mutually exclusive.

I can bake a cake for someone and still believe what they are doing is sin. That’s where true freedom exists — where true “rights” prevail — to love and respect someone even if we don’t agree with their moral stance.

Who among us is not called to do this on a regular basis in our workplaces, families, neighborhoods and community?

Jesus engaged with sinners all the time, loving them right where they were but simultaneously calling them to a life of repentance from sin.

God’s love is not an endorsement of sin.

A cake is not an endorsement of sin.

Are we as Christians so insecure in our faith and the ultimate sovereignty of the Lord that we are not able to stand on a foundation of love without thinking such demonstration of love equates to an endorsement of sin?

Love and conviction can co-exist.  Let’s hope so, because that’s the example Jesus is laying out to us all the time.  You can love someone, yet at the same time pray for Holy Spirit revelation in their heart.

You can love someone, yet at the same time speak up about what you believe is sin in their life.

If that’s not what Jesus was doing with the adulterous woman, then what was He doing?

Sadly, the word tolerate in our encounters with each other has increasingly meant “you must believe what I believe.”  Yet the true definition of tolerate at its core is, “You and I don’t believe the same things, but I still will treat you with respect.”

It seems to me that the Christian businesses who want to refuse service are consistently painted as mean-spirited.  But  couldn’t the same thing be said about those people who are viciously disregarding the business owners’ convictions, even perpetuating a climate of hate toward them?

Both camps could learn a lot from the true meaning of tolerate.  “You and I don’t believe the same things, but I still will treat you with respect.”

In my opinion, tolerance of this sort would lead to two outcomes on this particular controversy…

Fewer gay couples (and their advocates) forcing their agenda on Christian business owners.

Do you believe love and conviction can co-exist? What do you really think about this entire controversy?

I know I will hear from those of you who hate what I’ve written and those who love it, but I welcome the dialogue.

I can tolerate that.

21 thoughts on “The Gay Marriage and Cake Baking Controversy. What If…”