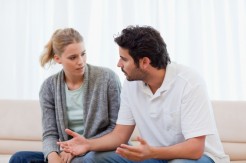 Ok, I have met a few people who think marriage is easy.

But those conversations are rare.  Count-on-one-hand-and-still-have-fingers-left rare.

Most people I meet who are willing to get vulnerable reveal something that tends to be more universal than unique — marriage is hard.

Worth it, yes.  Rich with possibilities, yes.  Designed by the Creator of the universe, yes.

My beloved and I have been in a hard season in our marriage as of late.  Certainly not insurmountable, but difficult and discouraging and “in-the-trenches” messy.  We’re persevering, learning, coming out of it more aware, and — in many ways — deeper in love.

For that I am humbly and eternally grateful.

Some things — ok, many things — if they are not destroyed by fire, are refined.  No place is this more true than marriage.

In this journey, I offer you three things to ponder:

1. Do the hard things of life draw you together or drive you apart?

In the hard things we’ve navigated lately, I’m increasingly aware of how better he and I do when the messiness doesn’t derail us.  I wish I could say we are never derailed, retreating to our own corners.

But we are growing in our ability to stand back and take note and be wise in the face of adversity.

Can you find a a way to inch toward each other instead of run in opposite directions?

2. Are you willing to put in the extra effort to fight for you marriage?

When marriage is cruising along, it’s effortless to take things for granted.  But when emotions are frazzled and miscommunication is staking ground in our hearts and home, our self-preservation mode (fueled by lies from Satan) compels us to do only the bare minimum…

Go through the motions.  Be civil, but not humble. Be present, but not really available.

Well, that is a crappy approach to building anything that will endure.

Sometimes, we have to resist our natural tendency to coast.  I’ve long believed that if unhealthy patterns (which are usually unintentional) go on long enough, they will become your normal.  Who wants an unhealthy normal?  Not. Me.

Putting in the extra effort — however that looks in your situation — is an intentional healthy God-honoring choice.

And more often than not, it’s hard to do.  Sorry.  That’s the truth.  But on the other side of continually choosing to fight for your marriage, what you’ll likely end up with is a marriage — a strong covenant commitment that is safe haven.

3. What happens to your sexual intimacy in a hard season?

I love sex.  I mean, really love it.  And while all the physical pleasure aspects are awesome (hallelujah), I also am deeply turned on by the emotional connection to the man I married when we make love.

And I know what that connection does to our relationship — how it helps us extend grace.  And who doesn’t need more grace during a hard season of marriage?

So what do you do in a hard season?

I know that some serious marriage problems are full of excruciating wounds. Sexual intimacy takes time to restore.  If you are in one of those places (such as trying to heal from adultery or other deep betrayal), I encourage you to work with a professional counselor.  And I encourage you to not take sex off the table indefinitely.

I believe, though, for most couples in run-of-the-mill hard seasons of marriage, sex still needs to be in the mix.

I know.  I make it sound simple. Probably won’t be.

But here’s the cold truth: Satan is already trying to sabotage your relationship.  When you stop having sex — which neither of you can biblically go get elsewhere — you unwittingly become a partner in Satan’s schemes.  You compound problems rather than relieve them.

My last piece of wisdom?  Pray for your marriage.

God will always be in the business of meeting you in your deepest heartache.  Yes, He already knows what is going on in your marriage. But He still longs for you to come to Him — raw and real — and talk to Him about it.

Marriage is easy. Said no one ever.

4 thoughts on “Marriage is Easy. Said No One Ever.”