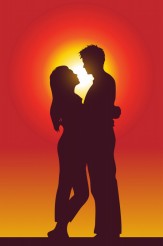 Were you sexually attracted to your spouse before you got married?

Sexual attraction is an interesting phenomenon, isn’t it?

We rarely have to tell it to show up when we are dating.

Sure, we can call it “physical” attraction, but when we really peel back the layers, what we find is genuinely more sexual.

That’s not a bad thing, mind you.

If anything, I think it confirms even more that God designed sex, and that He wants us to understand its power.

People who are not married obviously have to pay close attention to not following sexual attraction wherever it leads, because ultimately it will lead directly to sex if left unchecked.

Left to its own devices, it knows where it wants to go.  And for people who are not married, it will go there unless someone reins it in.

I remember when my husband and I were dating and engaged, our sexual attraction was intense.

Fortunately, one of us was always strong enough to set good boundaries. Sometimes that was me. Sometimes it was him.

It wasn’t easy, but we waited for our wedding night to loosen the reins and give into all that sexual tension.

Honestly, I would be a little leery of an engagement and forthcoming marriage if there wasn’t a fair amount of sexual attraction in the mix.  Well, not just leery.

I would probably outright tell the person that it is a huge red flag if they don’t find themselves wanting to be intimately close physically to the person with whom they have fallen in love.

But at our core we should recognize that there is a physical allure…something that draws us sexually to this person in a way that builds upon all the other things that draw us to them.

Ironically, what is typically difficult to stop before we are married can garner little or none of our attention after we are married.

At least that’s the case in some marriages. Maybe even many marriages.

It’s fascinating — and heartbreaking — when two people who had a difficult time keeping their hands off each other BEFORE marriage then find themselves in immense battles about sex AFTER marriage.

I know it sounds like I’m just talking about a physical response, but as I’ve already said, sexual attraction is an interesting creature.  And there rarely are hard lines around what piques our sexual interest.

Part of why I had to maintain a lot of self control to keep my hands off my husband before we were married — and without a doubt a main reason I often put my hands on him now — is that I am deeply attracted to who he is to me.

And who we are together.

I am turned on by our friendship, our inside jokes, our knowing, our commitment, our “we’re in the hard stuff of life” together, our laughter, our oneness.

Yes, I am deeply turned on by all that.

Sadly, in too many marriages, sex becomes a “have to” rather than a “get to.”

Desire that burned intensely before those covenant vows seems to have faded, been discarded or turned into a bitter source of discord and discouragement.

If you find yourself in that place… that place of sexual attraction having long been lost… what will it take to breathe life into your intimacy?

While passionate sexual intimacy in marriage indeed has to do with touch, foreplay and arousal, I believe it has even more to do with understanding how all of that works intimately within the context of friendship, trust and commitment.

Now is the time to nurture your marriage. The infamous “later” may never come.

7 thoughts on “Do You Know What Turns You On?”