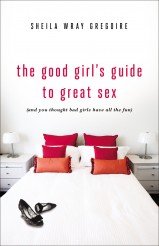 Good girls do have the best sex!

Invest in yourself and your marriage and snag a copy of Sheila Wray Gregoire‘s new book, The Good Girl’s Guide to Great Sex (aff. link).

I’m so glad Sheila, such a genuine voice on this topic, has put her insights to paper with this new book.

And I’m giving a copy away! (A shout out to Sheila’s publicist Jennifer for thinking of you, my readers, and sending me a giveaway copy.)

Below is a question and answer session I did with Sheila about the book.

My questions are in bold blue, and Sheila’s answers follow.

At the end I’ll tell you how you can have a chance to win the copy Jennifer sent me.

I genuinely think you’ll appreciate Sheila, a woman who feels like a friend — someone who wouldn’t care if your house was messy and would sit down at your kitchen table, enjoy a hot cup of coffee and REALLY talk about sex. Is it no wonder I like this woman?

There are increasingly a number of Christian books on sexual intimacy in marriage.  What are a few ways your book stands apart?

Before I was married someone gave me a book about sex in marriage. I read it in the bathtub, and it made me so mad I held it under the water until it drowned.

And then I dumped it in the garbage.

Why did I feel so homicidal towards a book?

It was all about how to make your wedding night work like clockwork, explaining what to do so that you’d have an orgasm. And it felt so choreographed. It was so much pressure!

I was young, inexperienced, and scared. I wanted some reassurance that sex was nothing to be scared about, and that I could relax and things would work out. Instead I felt like I was going to have to write a test afterwards to make sure I got everything right.

By the way, the book didn’t work. My wedding night was lousy!

But I’ve been married for 20 years now, and what I’ve found is that sex gets so much better. And one of the things that makes sex so stupendous is that it’s not just physical–it’s also emotional and spiritual, too.

It’s deeply intimate. That’s what I wanted to understand.

In the early years of my marriage when things weren’t working like clockwork, I yearned for a big sister who I could sit down with and ask real questions. But I didn’t have a big sister. And it seems like most of the books written about sex for Christians were either written by couples or were written by men.

I thought it was about time that a woman wrote a book that told it like it is.

And so I’ve tried to write a “chatty” book that talks about sex from a woman’s perspective, and lets it all hang out!

Never fear, though. I don’t pressure anyone to achieve some magical high or else they feel like they’ve “failed.” Instead, I try to present sex as a journey.

Don’t judge it by every single encounter. You have a lifetime to grow together! So relax, have fun, and get to know each other in a whole new way.

One thing that’s interesting about the research I did for my book: I asked people to rate their wedding nights in terms of how good the sex was. And then I asked them to rate their sex lives now. And having a lousy wedding night made absolutely no difference–absolutely none–on the quality of the sex people enjoy now.

So the message that my book gives women is “relax! Let what happens, happen. The amazing thing is that now you get to know each other in every way–physically, emotionally, and spiritually. So revel in that–not in whether or not you can try every position and achieve simultaneous orgasms in your first year together.”

What do you most enjoy about speaking and writing about sex?

This may sound weird, but I know you’ll understand this, Julie. I like saying the stuff that everybody else is too scared to say.

My husband and I speak at marriage conferences, and we always do the “sex” talk. And I have these comedy routines I do about what often runs through a women’s brain while she’s making love. And everybody roars with laughter, because we all know it, but no one talks about it.

Or else everyone’s scared to talk about the things that people are actually thinking about and wondering about, like sex toys, or oral sex, or different positions, or why can’t I orgasm? It doesn’t bother me to say those words out loud (though I admit it took a little bit of practice when I started).

But I find the reception is one of overwhelming relief. We have this idea that everyone in the church is such a prude that they’ll wilt if they hear the word “clitoris.”

But it’s not true.

Christians may be private, but we’re not prudes. And most Christians crave real information about sex that isn’t tainted by our culture’s warped view of what’s okay. I love filling that role.

Why do you personally think Christian married couples should be the biggest advocates for sex? How can we do more to ensure upcoming generations better appreciate and nurture sex in their marriages than possibly previous generations have?

The tagline for my book, The Good Girl’s Guide to Great Sex, is “and you thought bad girls had more fun.”

We have this warped idea that the Kim Kardashians of the world are the ones enjoying sex the most, but according to my survey (which confirms what others have said), it’s actually the church secretary who lives down the street, puttering in her garden, who may be carrying an extra forty pounds, but she’s been married to the same guy for 22 years.

When we listen to God’s design for sex, we have amazing sex.

And I think the primary reason is because we know it’s not just physical. An orgasm is great; but to make an orgasm really intense doesn’t involve something with batteries.

It just involves understanding that sex also unites you spiritually and emotionally, and when you feel that deep, intimate oneness with another person, there’s nothing else like it.

The reason our culture has such problems with sex, and why they’re always trying to push the envelope, is because all they have is the physical. Take sex out of the context of a committed relationship, and it becomes only about the body.

But it’s so much more than that. They’ve made it so shallow, and because of that they’ve wrecked it for so many people.

We need to be telling people, “You want to have great sex? Wait for marriage, and then have lots of it!” That’s the recipe for an amazing sex life.

THANK YOU Sheila for your wisdom and willingness to walk where God has called you in speaking up and writing about sex.

I encourage wives to glean from this book and recognize how you can embrace all that sexual intimacy can mean for you and your marriage.

Want a chance to win the free copy?!

Simply comment on this post by answering this question: “Why is it so important for Christians to become the BEST advocates for nurtured sexual intimacy in marriage?”

(I moderate my comments, so if it doesn’t show up right away, please be patient).  Be sure to leave a legitimate email address — it won’t publish publically, but I’ll have to have a way to reach you if you win.

At 9 p.m. Central time on Wednesday, March 14, I’ll randomly pick a number from the number of comments I receive on the post.   The comment that lines up with the number I pick is the winner!   **** UPDATE:  Winner of the drawing for the free book was Darcy!  Thank you for all the comments below… please read them and share them!