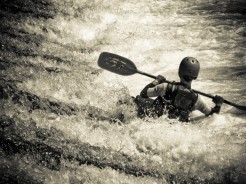 Back in my days of living in the corporate world, motivational gadgetry was popular.

Everywhere I looked, I would see posters, paperweights and coffee cups emblazoned with someone scaling the face of a mountain or crossing some white-water rapids in a kayak (which, of course, is exactly what every person in a beige 5×5 cubicle needs to see to feel encouraged. But I digress.)

I wanted to believe all the sayings and perfectly-lit pictures.  Really I did. Honestly, though, I can remember only one.  Here goes:

As I reflect on marriage, I would paraphrase the above quote this way:

“Every morning in marriage, a husband and wife wake up. If someone isn’t doing something to feed the marriage, the marriage will either starve or be killed.” (Okay, the paraphrase is a stretch, but you get the picture).

Lots of people agree with that statement. They recognize that something needs to be done to nurture their marriage.

But actually doing something? Well, that’s a different scenario all together.

I’ve spent plenty of time in both camps — the “agreeing with the need for improvement” camp and the “actually doing something” camp.

Trust me, actually doing something is a much more rugged camp.  But it has oodles more potential for better rewards, nicer views and more delicious snacks.

Sadly, many people are what I would call “marriage improvement” junkies.

They love the concept of marriage improvement.  They love the theories, the speakers, the books, the websites and the seminars.

But they aren’t overly thrilled or committed with putting any of it into practice. It’s the doing that trips them up a bit.

It is much easier to simply gaze at the shiny marriage improvement tips.  Doing is so much harder.

You may be a “marriage improvement junkie” if…

Marriage is hard. As I often say, the two people who radiated with eager anticipation at the altar eventually meander through messy garages, piles of laundry, stacks of bills and whiney youngsters.

All the “stuff” of doing life together creates, shall we say, a fair amount of discord, disappointment and disillusionment. There is a lot about marriage that is hard.

Long as we may for one “magic” resource that will fix everything that is hard, such golden ticket eludes us. That’s because each marriage is unique, and most marriage resources are developed for mass appeal.   Even if a resource is narrowed to one facet of marriage (sex, financial management, parenting, etc.), it is impossible for one resource to fix a marriage.

A marriage improvement junkie will simply go from resource to resource, always leaving feeling disappointed that the resource didn’t fix their marriage.

My suggestion? Learn and grow.  But stop looking for the one and only fix.

2. You regularly throw the baby out with the bath water on every resource you nab.

As a speaker and writer on sex, I like to read about sex and listen to other marriage advocates talk about sex.  Rarely do I find a resource with which I completely agree.

Even marriage resources that are more general are likely to contain at least a few things that either contradict what you believe or ruffle your feathers a bit.

Don’t disregard an entire resource just because you disagree with some of the things in it. Instead, recognize that you have the ability to discern what is helpful for your marriage.

Apply what resonates within your situation and let the rest go.  There are a lot of great resources out there.  And every one I encounter has at least something I can incorporate into making my own marriage healthier and stronger.

3. You focus more on what your spouse should change rather than on what you can change.

Out of respect for my marriage, I’m not going to get specific, but lately I have been irritated by something my husband does.  And then a light bulb went on for me during the discussion time in a women’s Bible study I’m taking on marriage.

I realized that I was pouring all my energy into being irritated — instead of trying to better understand my husband in this particular area.

It really was quite revolutionary for me, because I finally saw that my reaction (the only thing within my control) can have a profound positive impact on my marriage with regard to this irritation. My relentless focus on the irritation, however, has no positive impact.

Sooner or later in marriage (and in life overall) we realize that the only person we can truly change is ourselves.  Yes, the way we change our attitudes and actions often influences and inspires positive changes in our spouse, but ultimately that is beyond our direct control.

Change is hard, but as Paul Byerly points out in this amazing post, it can be what will propel a marriage from being good to being great.  Sadly, we often crave the comfort of our routine or status quo more than the possibility of healthiness within the relationship we have with our spouse.

You’re not a lion and you’re not a gazelle. No fancy saying on a poster or coffee mug is going to revolutionize your marriage.

But I hope you are waking up each morning and doing what you can to feed your marriage and not starve it.

If you’re feeling lost in the wilderness in that endeavor, get tight with the Lord, His Word, His truth and His guidance. Seek resources and walk in the direction of positive change.

Just don’t be a “marriage improvement junkie.”  You were made for so much more.