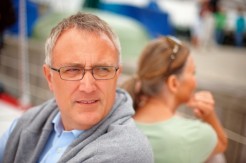 It’s a common argument, you know.

Yes, it’s a common argument that if they have kids, the suggestion, advice and pondering at least glances at “save your marriage for the kids.”

Well, I say, “Don’t save your marriage for the kids.”

Instead, save your marriage for you.

Yes. Save your marriage for you.

That’s what they’re going to do, you know.  They’re going to grow up and leave (God willing).  They may even take some of your money with them. (Likely).  You’ll have already given them all of your sanity. (True story).

And whether they ever say it or not, they will have engrained into their psyche and heart at least a little bit about marriage from what they saw in the two of you.

Could you…would you…should you save your marriage for you?

I can hear the squawking from the sidelines already… that I’m traipsing into a world of idealism.  Some marriages cannot be saved.  (Hey, I know.  I lived through the horrendous remnants of a marriage that was not saved).

But even when I look back on my own failed marriage, I still wonder if it could have been saved had we both humbly walked in that direction.  Baby steps.  Even one step.  I was willing; he was not.

So it should come as no surprise how vested I am in speaking encouragement into lonely dark places where couples entertain the idea that ending their union would be better than saving it.

Ask any marriage mentor or counselor and they will confirm that many marriages that end in divorce could have indeed been saved.

Saved by the two people in it.

Somewhere in the depths of a marriage teetering on divorce, often we find two people who do still have a strand of hope buried under all that resentment, anger and disconnect.

Two people. Each with a strand of hope.  Now we have something to work with.

If that describes you, don’t bail quite yet, okay?

And let’s face it — marriage is hard work.  It shouldn’t surprise us that if being in one is such hard work, saving one is going to require a fair amount of exhaustion and gut level effort as well.

Lest we think it can’t be done, reality would tell us otherwise!  There are examples of people who have saved their marriage.  I even know two couples who actually divorced and then eventually got married again…to each other.  You can see videos about their stories here and here.  Powerful testimonies.

As with anything, if we have fought hard to not just save it but to to make it healthy and strong, we discover such investment of ourselves was worth it.  Standing on the other side of all the horrendously hard work, we see.  It was worth it.

I don’t know your story or all the circumstances of your marriage, but if you are not divorced yet, could you approach your spouse from the depth of your soul?  Could you try one more time to weave two strands hope together to start to rebuild what has been torn apart?

My prayer is that you explore the possibilities.

And whatever you do, don’t save your marriage for the kids.

Save your marriage for you.

One thought on “Don’t Save Your Marriage for the Kids”